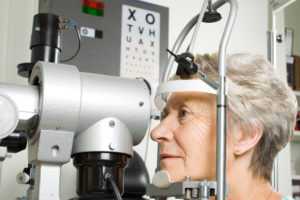 New evidence suggests that a simple eye exam may reveal evidence of Alzheimer’s disease (AD) even in patients who are not yet showing symptoms.

Using a specialized, but non-invasive, eye scan of the retina, researchers are hopeful that there is a correlation between the retina and the brain in patients with Alzheimer’s disease.

Optical coherence tomography angiography (OCTA) allows scientists to see and evaluate the smallest blood vessels of the retina as well as the blood cells flowing through these tiny vessels.

Alzheimer’s causes dementia.  Signs and symptoms of Alzheimer’s disease include impaired or difficulty with:

There is no single way to diagnose AD.  Some tests are simple.  Some tests, such as brain scans, are expensive.  There is also no reliable way to screen or predict who is at risk for developing the disease.

Your doctor or a neurologist may use a multifaceted approach to making the diagnosis.  Because so many other diseases can mimic Alzheimer’s, it is first important to rule out other causes of your symptoms, such as, stroke, Parkinson’s disease, depression or other medical conditions.

Presently, the diagnosis of this disease requires a multi-faceted approach to include:

Additional testing may be needed if the diagnosis of the disease is inconclusive:

New Retinal Scan | How it Works

Because the retina is connected to the brain, researchers believe they are able to correlate deterioration in the retina detected by OCTA with similar changes in the brain of Alzheimer’s patients.

Research has also shown that thinning of the retina correlates highly with shrinking of a part of the brain called the hippocampus seen in AD  patients.  Both these findings may indicate a person’s chance for developing Alzheimer’s disease even though the patient may not be exhibiting an symptoms.

Brain scans, though helpful in making the diagnosis of AD, are too expensive to function as a screening test.

It is hoped that the OCTA can be used as an inexpensive screening and diagnostic tool to allow earlier detection and possible treatments.