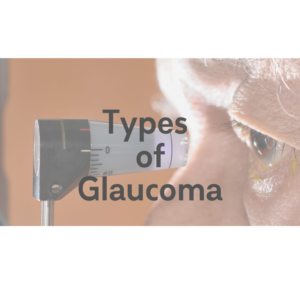 Open-Angle Glaucoma is the most common form of glaucoma and is usually associated with an increase in eye pressure.  This increase in eye pressure may be thought of as slow clogging of the aqueous humor drainage canals. But there are exceptions to this, some people have problems with their optic nerve and are at risk for developing glaucoma even when their eye pressure is within the normal range. That’s why it is important to have regular comprehensive eye examinations.

There are no warning signs or symptoms of Open-Angle Glaucoma during the early stages. As the disease progresses blind spots in a person’s peripheral vision will develop.

There are several other variants of Open-Angle Glaucoma. The type of treatment depends on the cause of the glaucoma. The other types are:

Angle-Closure Glaucoma is a medical emergency and requires immediate medical intervention. If treatment is delayed there can be permanent vision loss. Treatment is usually eye drops to lower the intraocular pressure, followed by iridotomy—surgery to open a new channel in the iris to relieve pressure.

If you are in a high-risk group, it’s a good idea to have a comprehensive dilated eye exam. There is no cure for glaucoma, but if it is diagnosed early there are treatments, such as prescription eye drops, laser surgery or eye surgery, that can control the disease.