What is blue light and is it dangerous to our eyes and overall health?

When you think of light, you think of sunlight and indoor lights, but that’s only a small part of light. Light is part of the electromagnetic spectrum which is the term scientists use to describe the entire range of radiant energy, which includes visible light, radio waves, x-rays and gamma rays.

Visible light consists of all the various wavelengths on the electromagnetic spectrum that are visible to the human eye. 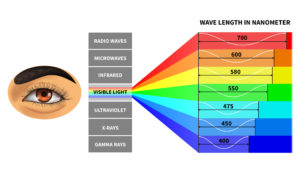 Isaac Newton discovered that the various wavelengths within white light are perceived as colors. He directed sunlight through a prism and noted how the prism bent and refracted the light at several slightly different angles all based on wavelength and that each wavelength was a color.

The colors contained in white light are red, orange, yellow, green, blue, indigo, and violet. The colors can be easily remembered by using the mnemonic ROY G BIV

Blue light comes from the sun, and digital screens such as TVs, computers, cell phones, and fluorescent, and LED lights. The blue sky we see is short-wave, high-energy blue wavelengths. The blue wavelengths scatter more easily than other visible light rays when they strike air and water molecules in the atmosphere, so blue light is literally everywhere.