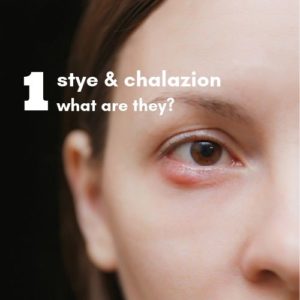 What is the difference between a stye and a chalazion (plural chalazia)?

This is part of a series on styes and chalazia.  Links to other articles may be found at the end of this article.

What is a stye?

A stye is a bacterial infection at the edge of the eyelid or just under it. The medical term for a stye is “hordeolum”. In Latin, hordeum means “barley” and that closely describes the appearance of a stye, When a stye forms it looks as though there is a tiny grain of barley on the edge of the eyelid.

Most styes are caused by a staphylococcal infection. A stye usually begins with redness, tenderness, and pain on the eyelid margin where the stye is forming, then a small, round, swollen and tender area emerges.  The eye may water and be sensitive to light and feel sore and scratchy or as though something is in it. Usually only a small area is swollen, but in some cases the entire lid swells. Often a small yellowish spot of pus develops at the center of the swollen area.

There are two forms of styes—external and internal. An external stye begins at the base of the eyelash and an internal stye forms inside the eyelid. Most internal styes are caused by a bacterial infection in an oil-producing (meibomian) gland in the eyelid.

What is a chalazion?

A chalazion is a cyst—not an infection, in one of the glands that make an oily, fatty secretion that is part of the tear film that protects and lubricates the eye. Those glands are called meibomian glands and a chalazion is an inflamed swelling of one of those glands where the oil has clogged up. The word chalazion is Greek and means “little lump”.

How can you tell the difference between a style and a chalazion?

Styes, which are caused by an infected eyelash root, usually form at the eyelid edge, while chalazions, which are a backup of oily eye lubricant, usually develop further back on the eyelid where the oil-producing meibomian glands are located. A stye is always very painful and a chalazion is usually not painful.

Additional articles on styes and chalazia:

Part 1: What’s the difference between and stye and chalazion?

Part 2: Symptoms of Styes and Chalazia