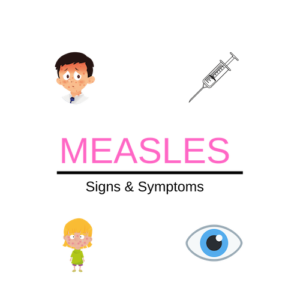 Measles is a highly contagious viral infection. It usually begins its attack on the respiratory tract and then spreads to other areas...including the eyes.

Measles symptoms usually appear one to two weeks after infection with the virus. Symptoms begin with a high fever, and may include, cough, runny nose, generalized body aches, and red, watery eyes.

The most recognizable symptom of measles is a body rash which begins three to five days after the other symptoms. The rash usually starts as flat, red spots on the face that spread downward to the neck, trunk, arms, legs, and feet.

Because it is highly contagious, measles can be spread in several ways, such as when an infected person doesn’t cover coughs or sneezes. An uncovered cough or sneeze from someone infected with the Rubeola virus sends virus particles into the air that can land on surfaces and other people.

The virus can remain active on objects for two hours after being touched or coughed or sneezed on by a person infected with the virus.

A person infected with the Rubeola virus can spread it to others for about eight days—starting four days before the rash appears and ending when the rash has been present for four days.

Complications—The Reason Measles Can be Dangerous

According to the Centers for Disease Control and Prevention (CDC), measles can be serious in all age groups, but children younger than five and adults older than 20 and people with weakened immune systems from HIV, leukemia, or a vitamin deficiency are more likely to have measles complications.

Common complications are ear infections and diarrhea.  Severe complications such as pneumonia and encephalitis can occur and require hospitalization.

According to CDC statistics:

Complications that are very rare, but possible include:

There is no treatment for measles except resting and drinking enough fluid to prevent dehydration. Once infected, the disease has to run its course, but complications should be treated promptly. Measles is a viral infection, so antibiotics won’t help.