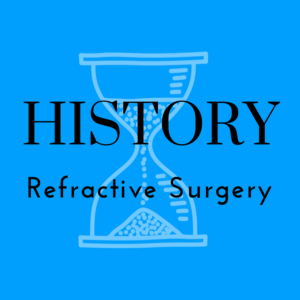 Surgical vision correction is achieved by reshaping the cornea in a procedure that is known as refractive surgery.

Refractive surgery had its beginning in 1948 when Father Waclaw Szuniewicz, a Polish missionary and ophthalmologist experimented with changing the shape of the cornea. From 1931 to 1949 he served as a missionary and as the head of the Department of Ophthalmology at a hospital in Shuntehfu, China. During this period he performed over 5000 ophthalmic operations a year. He came to the US in 1949 and continued his refractive surgery work at Yale University.

José Ignacio Barraquer Moner, a Spanish ophthalmologist, who did most of his work in Bogata, Colombia, devoted his career to developing new refractive surgery techniques and surgical tools. He wrote 268 articles, invented 19 surgical techniques, and created 45 surgical instruments and is known as the father of modern refractive surgery. His most famous published research in 1964 led to the development of the PRK and LASIK procedures.

Svyatoslov Fyodorov, a Russian ophthalmologist, treated a young boy who had fallen off his bike and shattered his eyeglasses which lodged glass particles in both his eyes. After Fyodorov removed the glass particles and the boy’s corneas healed, Fyodorov discovered that the boy’s nearsightedness had significantly improved because the radial cuts to the cornea from the glass fragments had flattened his corneas.

From this experience, Fyodorov developed a refractive surgery technique to correct nearsightedness which consisted of making several radial incisions extending from the pupil to the periphery of the cornea in a radial pattern like the spokes of a wheel and then reshaping and flattening the cornea.

The excimer laser is a form of ultraviolet laser that was originally developed for use in the photolithography process of microelectronic chip manufacturing for the semiconductor industry.

The FDA approved the use of the excimer laser in 1995 for use in PRK procedures and in 1999 for LASIK procedures.

The high-energy pulses of ultraviolet light used in an excimer laser penetrate only a microscopic amount of the cornea and can remove as little as 0.25 microns of tissue at a time. For some size comparison—one micron is one-thousandth of a millimeter. A human red blood cell is about 5 microns across. A human hair is about 75 microns across.

Difference Between PRK and LASIK?

PRK does not create a corneal flap prior to reshaping the underlying cornea. The thin layer of cornea that is removed is discarded, but it grows back. However, the recovery time is longer for PRK—about 1 to 2 weeks for initial recovery and about six weeks for sharp vision.

LASIK involves the creation of a corneal flap before the underlying cornea is reshaped.  After the reshaping is completed, the corneal flap is put back in place. Recovery from a LASIK procedure is usually 24-to-48 hours.

Both surgeries are safe and have a high rate of patient satisfaction.

People with thin corneas, chronic dry eyes, and some astigmatic conditions should have the PRK procedure instead of LASIK.  We will review all your options during your consultation.

We look forward to seeing you. If you have questions about treating glaucoma or to make an appointment, please give us a call.