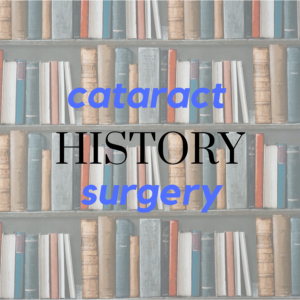 This article is part of a series we have written to recognize Cataract Awareness Month.

A cataract is the clouding of the usually clear lens fibers of the eye. This clouding obstructs vision and when the clouding becomes severe the cataract can cause loss of vision it blocks incoming light.

The natural "crystalline" lens of the eye is a mix of several proteins and when those proteins age, they can clump together and form a cataract that clouds the lens which then scatters or obscures incoming light.

Cataract surgery is the removal of the clouded lens of the eye to restore vision.

From the beginning of recorded time people have searched for ways to restore vision to those who were blinded by cataracts.  There are records of cataract removal attempts dating back 2500 years.  At that time, the procedure to remove cataracts involved using a needle to push the clouded lens out of the way and deeper into the eye where it would be absorbed.

Pushing the lens away and out of the visual axis would enable light to enter the eye once again, but without the lens, the light was not focused precisely on the retina, so the restored vision was blurry.

A French ophthalmologist, Jacques Daviel, performed the first removal of a lens in 1747.  He used a small blade, a needle, and a spatula, and recommended using the fingers to push the lens out and onto the patient’s cheek.  After the procedure, the patient's eyes were cleansed with a mixture of water and wine and sandbags were placed around their heads to keep them immobilized for eight days.

And still, many patients died from infection.

In the 1870s, the germ theory of disease was gaining acceptance and by 1900 the aseptic, or sterile surgery suite, was adopted. In 1928, penicillin was discovered and there was now an antibiotic to fight infection. Both innovations made cataract surgery safer, but still, once the clouded lens was removed, vision was blurry and people had to rely on thick glasses to focus the incoming light.

The English ophthalmologist Harold Ridley noticed that a WWII pilot’s eye did not reject the fragments of acrylic that entered the eye after a plane crash.  Ridley started thinking about creating an artificial lens.  In 1949, he implanted the first artificial lens.  The medical community did not embrace this new technology and it wasn’t until the 1980s that artificial lenses became common.

In the 1960s, Charles Kelman was inspired by his dentist’s ultrasound descaler that removed plaque and calculus. Kelman invented phacoemulsification and used it for the first time in 1967. The procedure uses ultrasound to emulsify the clouded lens which is then suctioned away.

In 2010 the FDA cleared the femtosecond laser for cataract surgery. The laser uses electromagnetic pulses to break up and remove the cataract.

If you are experiencing visual problems because of cataracts, talk to an ophthalmologist and find out how cataract surgery can restore your vision.

Posted in Cataract Surgery and tagged History of Cataracts