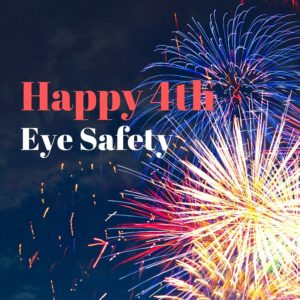 This is the time of year when people attend fireworks shows or buy their own fireworks and set them off in their backyards. Fireworks are dangerous explosives, so you need to be careful and take precautions.

Fireworks can malfunction. At a California fireworks show in 2013 a defective shell exploded early and sent shrapnel into the crowd injuring 39 people. In 2015 a firework shot into a crowd near Vail, Colorado and injured nine people. However, injuries at professional fireworks shows are uncommon. Most injuries caused by fireworks are the result of misuse by consumers.

The U.S. Consumer Product Safety Commission (CPSC) reported that fireworks were involved in an estimated 9,100 injuries in U.S. hospital emergency departments during 2018 and 62% of those injuries happened between mid-June and mid-July.

The U.S. CPSC found that 19% of the injuries were eye injuries.

Even sparklers can be dangerous because they burn at more than 2,000 degrees Fahrenheit. Sparklers can catch clothing on fire and cause severe burns. Sparklers caused 1,200 injuries in 2017 and one death. Bottle rockets are the type of fireworks that cause most eye injuries.

WHAT TO DO IN CASE OF FIREWORKS EYE INJURY

An eye injury from fireworks combines blunt force trauma, heat burns, and chemical exposure and is a medical emergency.

The following safety tips are from the U.S. Consumer Product Safety Commission: